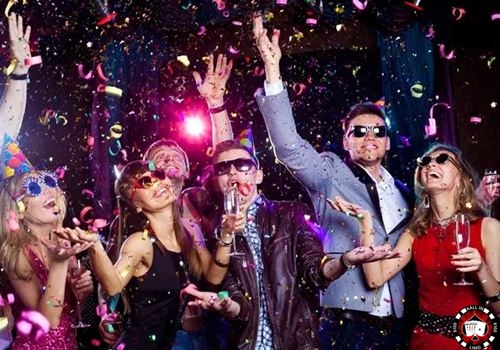 San Diego is the perfect place to be for New Year’s Eve. Parties are ready for San Diego’s exclusive, live entertainment, fancy cocktails and delicious cuisine. If you’re still uncertain of what you will be doing on Dec. 31, don’t worry, there are several parties that will be going on this year.

The Limo Party Bus is one of the best choices for New Year’s Eve. Our cozy vehicle can accommodate more than a dozen people who want to celebrate NYE in San Diego. Some of the features of this exquisite vehicle are:

Some of the Wildest 2018 New Year’s Eve Parties to Hit in San Diego are: 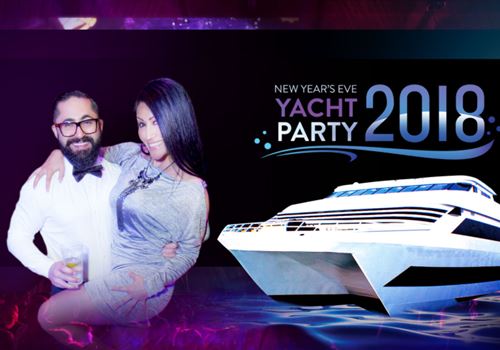 Spend the New Year on the largest mega yacht in Southern California: The Inspiration Hornblower! Downtown San Diego’s Official New Year’s Eve Yacht Party 2018 features all-inclusive premium bars and top-shelf liquor with unparalleled cityscape scenery. The yacht will have 12 bars to minimize the lines, an amazing 360° view of San Diego Harbor on the top deck, a free interactive photo booth that will surely turn your legendary evening into an unforgettable memory, party hats, noisemakers and a glass of champagne upon boarding.

The party is going to rock so hard, as each deck will have its own DJ an dance floor on all its three lively levels. A variety of music will be playing, including Hip-Hop, Top 40, Dance Remixes, 80’s, 90’s and much more ...all enhanced by the glow of glittering flashing lights! Imagine celebrating New Year aboard a yacht almost as long as a football field! Before you even know it, you will toast a glass of champagne underneath the stars, with a smooth breeze flowing of the gentle waters of San Diego Bay. Be quick, though! Limited tickets will be sold to avoid overcrowding. 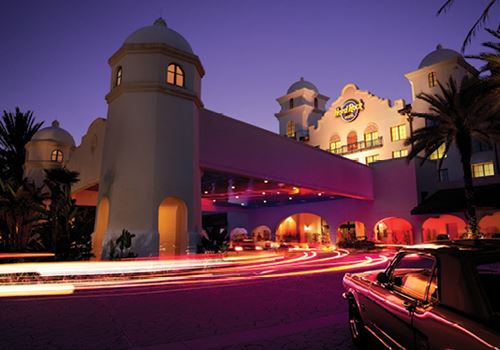 This year, San Diego’s RMD and Hard Rock Hotel are bringing the biggest party to you with the largest New Year’s Eve celebration in the Gaslamp.

Over 15 DJ’s and two headliners will keep the atmosphere vibrating while champagne will magically flow from 25 bars throughout the hotel.

Find your midnight kiss among eight astonishing rooms and three floors of euphoric celebration at Hard Rock Hotel, downtown’s hottest New Year’s Eve party! But be fast! ...this event will soon sell out. 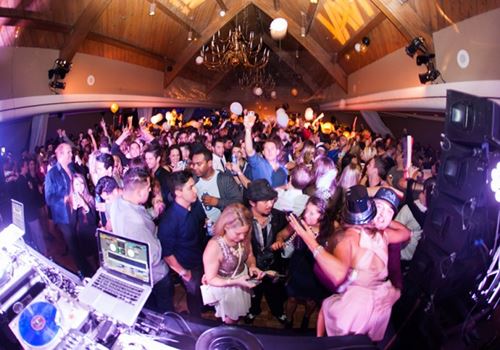 Big Night San Diego New Year’s Eve Gala is the perfect all-inclusive night – your ticket will include absolutely everything: drinks, buffet, and entertainment throughout all party zones. Prices start from $119.99 per ’Main Event’ Ticket and reach $179.99 per VIP Ticket and $229.99 per ’Velvet Rope’ Ticket.

4. Marriott’s New Year’s Eve Bottom’s Up – Your Party In The Sky 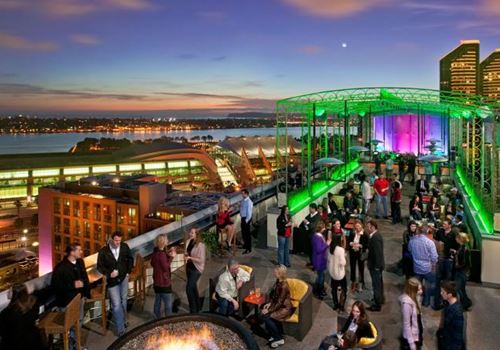 Take your New Year’s Celebration to new heights with San Diego’s Marriott in Gaslamp Quarter! From the Lobby to the Altitude Sky Lounge, enjoy free-flowing champagne, unlimited drinks and domestic beers, two of San Diego’s premier DJ’s, over the top selection of great food stations plus a chocolate fountain!

Start the street level and finish 22 stories in the sky! Experience the countdown to 2018 on Altitude Sky Lounge – the most awesome rooftop hotspot - plus their newest addition: City Sights. Prices from $189. 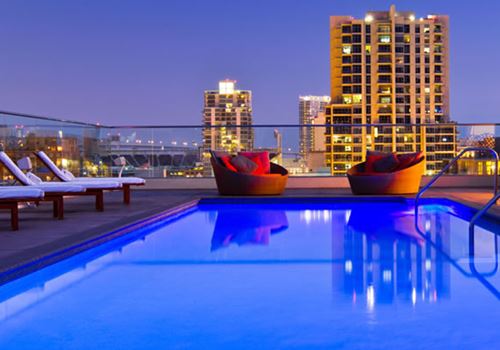 This New Year’s Eve you are invited to an exclusive plain-air party at The Rooftop by STK, San Diego’s premier nightlife hotspot, sitting high atop the luxurious Andaz Hotel! If you’re searching for the New Year’s Eve experience, Andaz Hotel sets the scene for an unforgettable night.

Take in panoramic views of San Diego as you spoil yourself in luxury! With an exclusive penthouse party, a premium open bar, on the house midnight champagne and awesome music selections hand-picked by their live DJ, Andaz Hotel’s Rooftop STK promises a wild night! Get wild and festive at this crowning nightlife destination!

Book a Limo For New Year's Eve From Aall In Limo & Party Bus!

Here at Aall In Limo & Party Bus, we are getting ready for New Year’s, same as you. No matter how you are planning to ring in the New Year, just remember not to drink and drive! And as it’s never too late to book your ride, we encourage you to call us at 858-336-1894 and book your limo today!

From all of us at Aall In Limo & Party Bus, we wish you a fun and safe New Year!