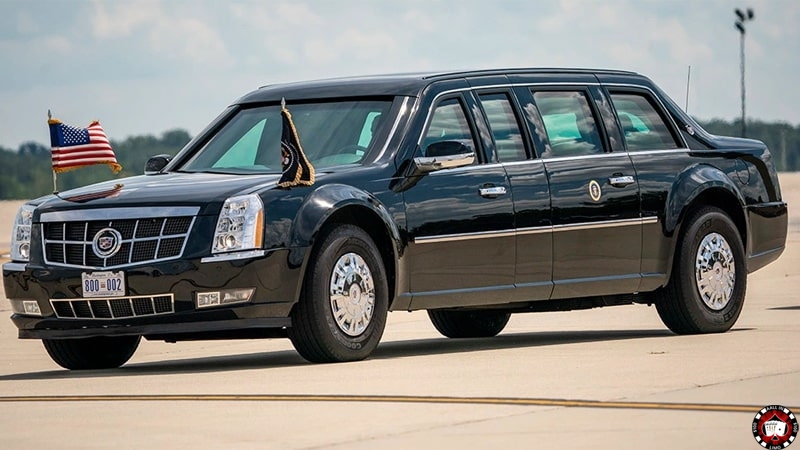 The Presidential state car is a hot subject among many, but how much do we know about the world’s most heavily armored presidential limousine?

Not much, I would say; after all, the Limo One’s specs are classified for security reasons.

The Secret Service refers to the heavily armored limo as The Beast, a name that fits this specially commissioned vehicle like a glove. Since the late 1930s, the Federal Government of the United States has commissioned a variety of vehicles for presidential use.

These vehicles have both officially and unofficially been acknowledged as the presidential vehicle, American cars being traditionally chosen for this important role. The Beast is equipped with:

A Bit Of Presidential Limo History… 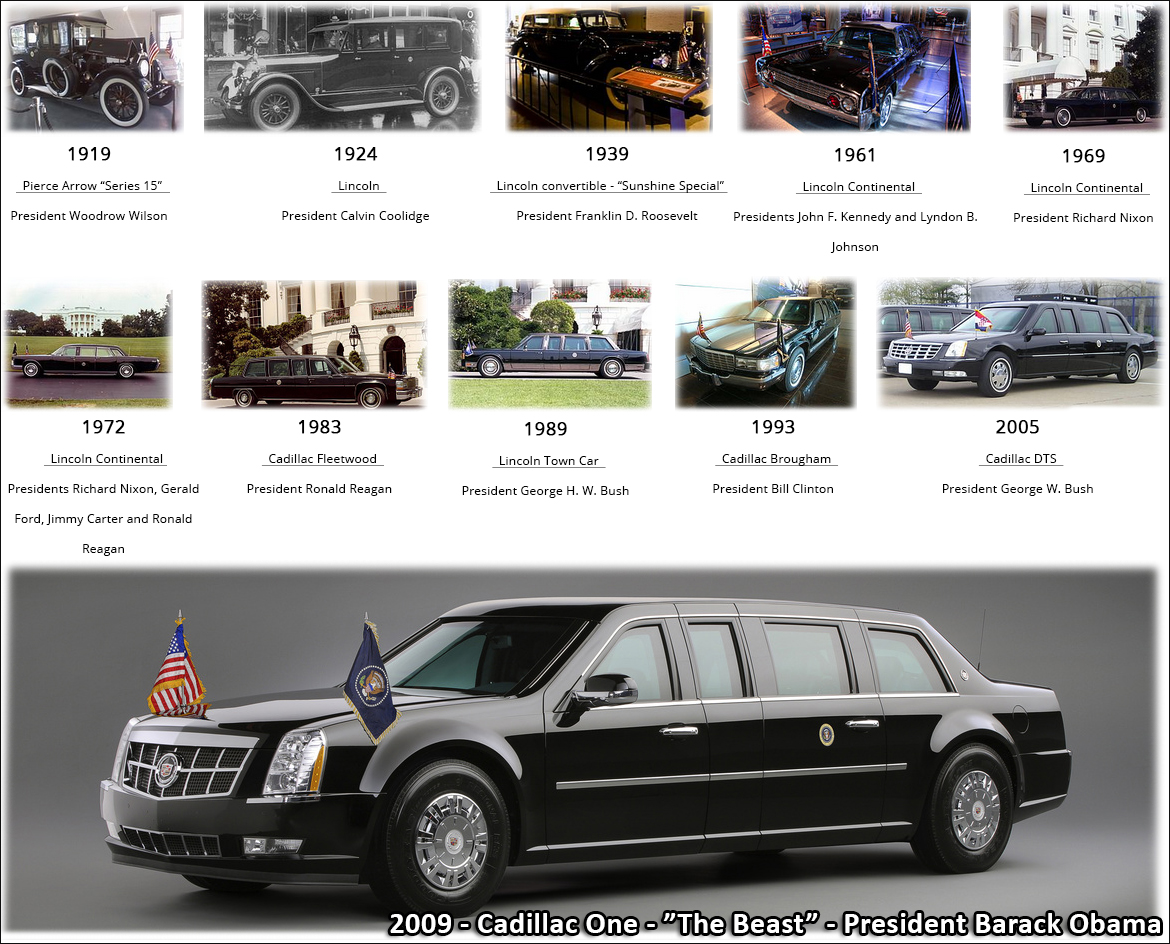 President William McKinley was the first president to ride in an automobile, but the first government-owned automobile, a white Stanley Steamer, was used during the presidency of Theodore Roosevelt. President Woodrow Wilson was one of the first chief executives to ride in a Cadillac during a World War I victory parade in Boston.

In 1938, 2 Cadillac convertibles dubbed Queen Mary and Queen Elizabeth were both delivered to the U.S. government, serving Roosevelt, Truman, and Eisenhower.

The Sunshine Special, used by Roosevelt, was:

Lincoln limousines were presidential vehicles up until 1983 when Ronald Reagan used a Cadillac Fleetwood Brougham.

In 1989, George H.W. Bush was riding in a Lincoln Town Car, but the age of Lincolns used for presidential purposes ended since then.

Bill Clinton used a Cadillac Fleetwood in 1993, which was the first Caddy designed from the ground up for use as a state car. The limo is now on display at the Clinton Presidential Library.

Impressive from top to bottom, The Beast shares little in common with a standard production car. Although the outward appearance carries many current Cadillac styling themes, the body itself seems to be a modification of the immediately previous DTS-badged Presidential limos. However, the chassis and driveline are sourced from the Chevrolet Kodiak commercial truck, and many body components are sourced from a variety of Caddies:

Although many of the vehicles’ security enhancements cannot be discussed, it is safe to say that this car’s security and coded communications systems make it the most technologically advanced protection vehicle in the world.

Nicholas Trotta – Assistant Director for the Office of Protective Operations 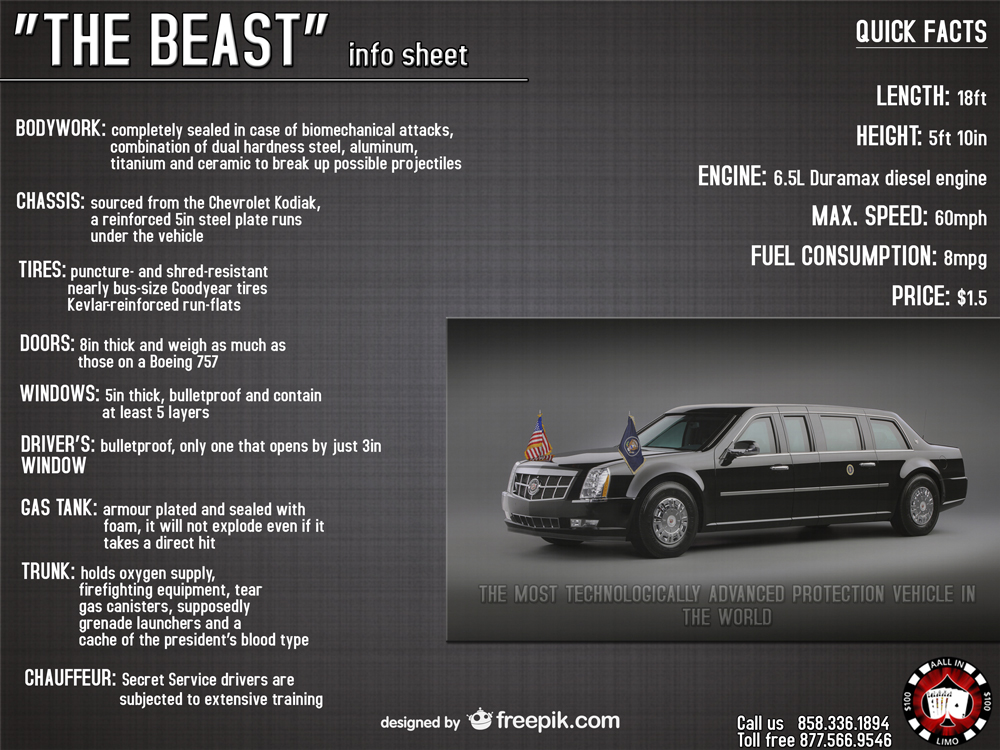 No price tag has been announced, but it is assumed that each limousine costs around $1.5 million. Each limousine? YES. There is not just one Beast roaming the streets, but a few of them.

The other limos are used for high-ranking foreign officials and VIP guests when they are visiting Washington, D.C., but nobody knows why the Secret Service rotates between presidential vehicles.

Also, it is not known whether they are all functionally identical. Some do look more like a DTS than The Beast.

In addition, the president sometimes travels in a heavily-armored Chevrolet Suburban or a modified Prevost bus known as Ground Force One.

Calling this limo armored is an understatement… and that is because probably there is not a better-armored vehicle with windows on the planet than The Beast. The armor plating on it is allegedly 8 inches thick, and the doors weigh as much as those on a Boeing 757.

The windows are also very impressive:

You can only imagine just how heavy this vehicle is! Judging by its rumored weight of 20,000 lbs., The Beast needed proper tires and a good enough engine for lugging all that weight around.

The puncture- and shred-resistant, and nearly bus-size Goodyear tires are Kevlar-reinforced run-flats capable of keeping the limo on the road for a good distance if needed. The steel wheels can keep rolling even if the tires do get punctured.

All the protection does come at a cost: The Beast sips fuel at a rate of 8mpg! The diesel engine is not the greatest out there and hitting 60mph from a complete stop takes about 15 seconds. 60mph is also believed to be Caddy One’s top speed. The Duramax diesel engine is closely related to the ones featured under the hood of Chevrolet and GMC’s full-size heavy-duty pickup trucks. Why diesel and not high-quality unleaded fuel? There are three main reasons why this guzzler feeds on diesel:

4 Facts That Make "The Beast" Even More Unique 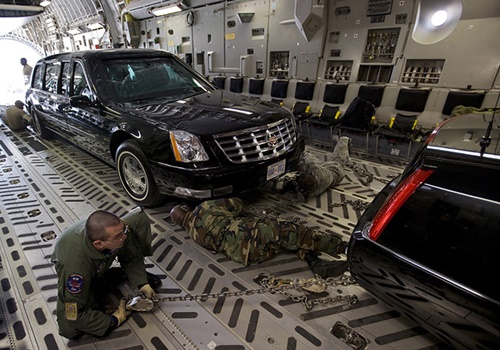 On to the second fact, the equipment carried by The Beast is something out of a James Bond movie. Pop open the trunk, and you will find anything from firefighting equipment, oxygen tanks, tear gas canisters to shotguns, supposedly grenade launchers, and even a cache of the president’s blood type!

The driver is not your average one. Only highly-trained drivers are used, which can execute police-style evasion techniques if needed.

Each Secret Service driver is subjected to extensive training on a secluded site, which is believed to be a military base, with input from GM engineers and test drivers.

The vehicle can hold seven passengers. At the very least, it has three passengers aboard:

Four additional seats in the back are available, 3 of them being rearward-facing spots on a bench and one spot next to the president. There is a folding desk separating the president from his guest’s spot.

The president’s bench is covered in a dark blue cloth rather than leather, but the vehicle has plenty hidden on board. Shoulder belts buckle into the outboard corners and retract toward the center of the bench.

For a Presidential Feeling, Choose Aall In Limo & Party Bus!

Although we may not be driving around in armored limos, we can get you and your friends safely to and from any event in San Diego and Temecula. From San Diego brewery tours, Temecula wine tasting to business/corporate meetings and other formal events, we provide our clients with VIP services.

Whether you need transportation services for one or for a large group of board members, special guests, seminar attendees, visitors, or any other large group, we can accommodate your needs.